In 1817, First Presbyterian Church dedicated its first edifice at 1 Franklin Street, at the corner of North Street and facing municipal land where the fire station is today. Here the New School Presbyterians convened in 1837 and The Auburn Declaration was signed. 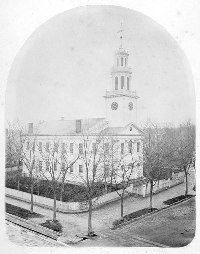 The congregation outgrew the church and donated it to the Lansing Street Presbyterian Mission School. The building was dismantled and moved up the hill to 90 Franklin Street, land owned by Elder James Seymour. It was rebuilt in 1869 as a smaller structure, known first as the Seymour Chapel but soon as Calvary Presbyterian Church. 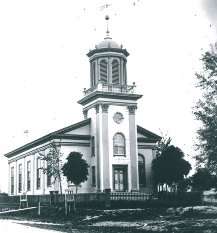 The northeast entrance was added in 1882.

In 1888 the building was raised off the foundation and a complete basement was built below the structure, which also was enlarged. 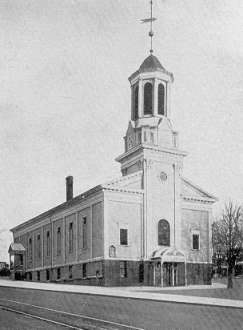 The northeast entrance was evidently removed in 1919. The original Corinthian detail of the Old First Church was preserved through 1972. 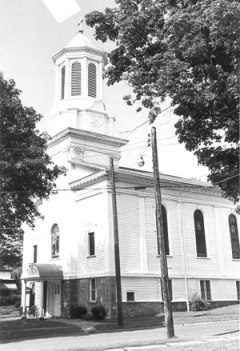 The congregation removed the Corinthian capitals and sided the structure in 1973. Most of the architectural details remain beneath the siding. One capital is displayed inside the church. 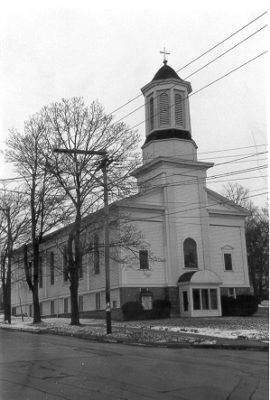 The interior of the church when it was rebuilt in 1869 was Victorian. The following 1901 picture shows the organ installed in the east end that year. 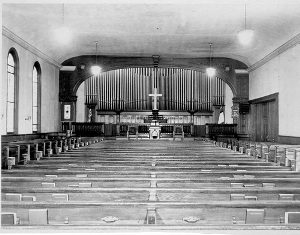 In 1919 the Austin organ was installed, as were new stained glass windows. Both remain today. 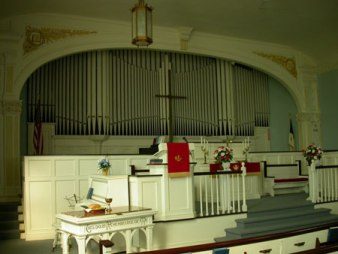 From late 1945 until 1949, Rev. George E. Davies led a building program to refurbish and modernize the interior. The work was done by John D'Arcangelo of Buffalo, New York. The Victorian interior was transformed into a colonial revival sanctuary of rare beauty. 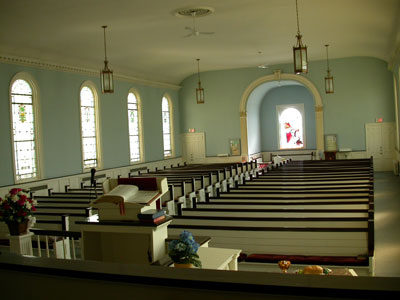 The Corinthian detail was reflected even in the Victorian interior, and highlighted in the transformation. 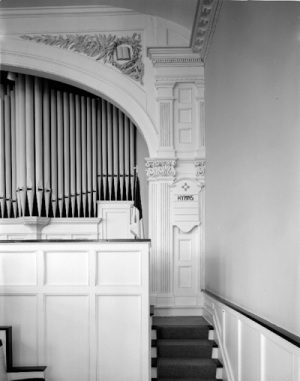 The Old First Church interior has always remained in the west end of Calvary. Rev. Dirck Cornelius Lansing, a founder of the Auburn Theological Seminary, preached here, as did Rev. Charles Hawley, founder of the Cayuga County Historical Society and a beloved leader in the community. Calvary had the pulpit here from 1882 through 1888, when George Black Stewart, soon to be president of the Auburn Theological Seminary, was the minister.

On March 7, 1869 Rev. Hawley preached for the last time in the Old First Church. The morning sermon was a discourse on the history of the church.

Rev. Hawley's predecessor, Henry Addison Nelson, was invited to preach the last time, in the evening. Nelson had been called to First Presbyterian Church in St. Louis and by 1869 was known as having saved Missouri for the Union. Too taken up with duties at the Lane Theological Seminary to accept the invitation, Rev. Nelson sent a letter, which Rev. Hawley read. Rev. Nelson said:

"To preach the last sermon in that dear old church, the most beautiful structure, to my eyes, that they ever looked upon--in which I knelt to receive 'the laying on of hands of the Presbytery;' in which I first took upon my conscience the pastoral vows, and on my heart the sweet burden of the pastoral care; ... whose ... arches and pulpit, with every line and leaf in all its profuse and elaborate carving, are imprinted 'in my mind's eye,' ineffaceably; the very throbbing of whose wall behind me, at the strokes of its bell, made it seem alive; that blessed old edifice, now about to resound for the last time to the voice of a preacher, and the privilege offered to me that it should be my voice!"

Rev. Nelson lived a long time after 1869, and witnessed the building resounding again to the bell, the music, and the voices of the faithful. Today Calvary is the home of the Calvary Food Pantry, the Unity House Drop-in Center, and the Thompson Memorial AME Zion Church. 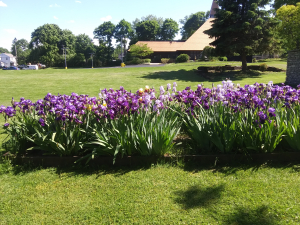 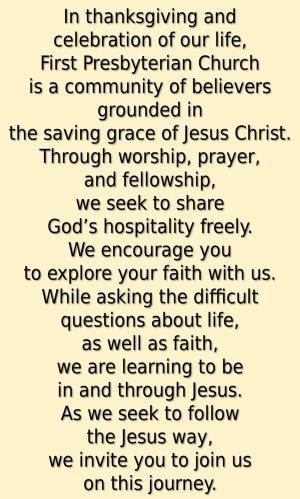 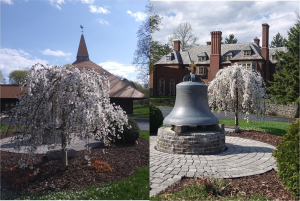 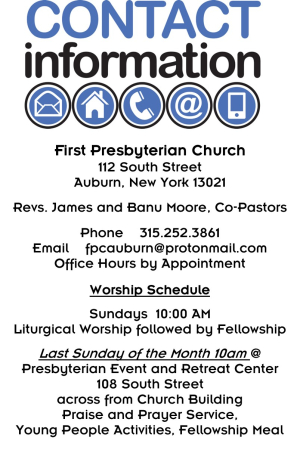